Finished some purity seals today. I think I really accomplished my goals
this time which makes sense as it generally takes three times for the normal
mind. First here is the general look I am shooting for: 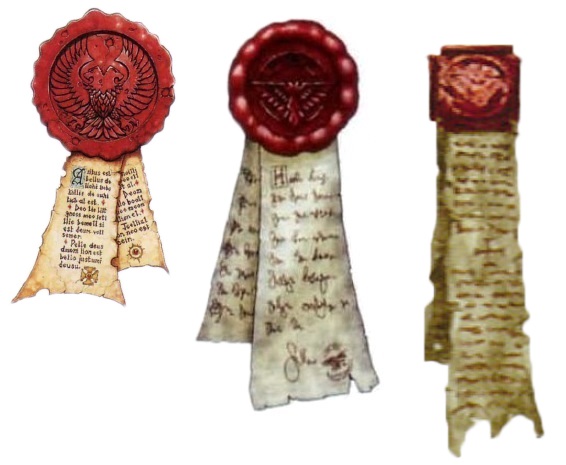 The general structure is a wax seal at the top with some symbol of the
Imperium (Aquila, skull, equipment, etc) and about a two inch wide cloth scroll
about 10 inches long featuring a prayer of some sort. It is a sign that the
wearer is of pure faith (untainted by chaos) and is fully devoted to the
Emperor and by extension the Imperium. I like to make them as they are good
gifts for people who recognize my cosplay. However, if I am giving out a lot of
these seals I need a good mass production solution. It is no good to me to make
just one or two really nice seals. I need to make a lot. My first two revisions
predate the blog’s creation so this post, while motivated by finishing a third
revision, will be talking about all the versions I have made.

Lets look at how all three versions line up: Version one on the
left, two in the middle, three on the right.

The first seal was made with apple scented wax. It is a pleasant scent and
very vibrant. I made it by drilling out about a 2.5 inch diameter circle in a
board of wood and filling the inside of the circle with tinfoil. Then I would
pour the wax in. The wax itself I melted and mixed with hot glue. The idea
being the wax and glue would cool together and strengthen the resulting disk.
The actual paper is just lightly colored construction paper I printed some
prayers on. The prayers I used have been attached at the bottom of this post. I
hot glued the paper and a fastener to the back. On the front I used a wood
burner to melt out the Cadian gate symbol and then I painted in the indentation
with black paint.

This was a pretty decent first attempt. I achieved the general shape and
look, but it has the feel of a cheap knockoff. Regardless it was easy to make.
The glue on the back failed on a few of them, but for the most part it seems to
hold things together well enough. The tinfoil mold method works, but the
resulting seal is bumpy and not uniform enough. I made about 30 of these.

Three main changes in this revision. One, I used printable cloth this time
for the scroll part. The scroll is cloth like in-universe so the purity seals
are now more closer to reality. Two, the cloth started out white, but I stained
it with some black tea to give it a more weathered look. I then burnt the edges
using the stove to further this look. Three, I used slightly darker wax which I
still mixed with hot glue. This color is less vibrant, but more in line with
the actual purity seal look. Also of note, this version shows my first attempt
to use a tuna fish can as a wax mold. Aside from it being incredibly difficult
to remove the wax, the seal looks just a bit too big. I only made a few of this
size, the rest I used the tinfoil method described previously.

This seal is a marked improvement over revision one. The cloth part makes it
look much better. Further improvements to the molding process also made for a
more uniform look. I made around 20 of these. Two big changes in this revision. One, I stained the cloth much darker to be
more in line with the in-universe examples. This was done by two successive tea
stainings. Two, I was able to get a much nicer rounded seal by using a silicone
muffin tray as my mold. The silicone tray allows me to easily remove it once it is cooled and gives
a very uniform circle.

Two small changes of note. One, the placement of the fastener on the back.
Previously I placed the fastener in the middle of the seal. This unfortunately
makes the seal flap around unnaturally when worn as it will rotate around the
middle. Now I placed the fastener at the top of the seal which reduces the
amount of flapping that happens when worn. Two, I abandoned the wood burner
indentations and instead just painted the gate on freehand. I was a little
concerned I would mess up a few times, but for the most part I exhibited a
steady hand. This sped up the production process and did not noticeably change
the look.

Overall the darker scroll makes these seals look much better. Now that the
seal itself is more uniform I would say this revision is much closer to the
in-universe examples. I made 18 of these and am ready for Connecticon. Couple things I want to clear up in future revisions: